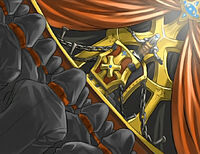 The Assassin's Guild (組織 "The Organization"), also known as the Assassin's Syndicate, or just "The Guild", is a group composed of assassins. It's been around for a hundred or more years, and works in secret and has huge networks across different countries. Many of its members have battle prowess similar to that of Gears, and it is suggested that the practice of Forbidden Magic has taken place at The Guild.

Though it wasn't this way at first, the Guild has its hands in politics; it is certainly able to influence the politics of A Country and evidence points that the Guild may in fact be based there. They are also known to make alliances with corrupted officials. Many presidents of A Country are just "puppets" of the Guild.  Erica Bartholomew, President Vernon's predecessor, was one of them, though she formed an alliance with Zepp to sever the nation's ties with the Guild[1].

The Assassin's Guild was founded by Slayer in 1998 to, quite frankly, give the vampire a steady supply of blood[2].  Initially, members were chosen by Slayer himself, in order to punish those the law could not. However, Slayer met Sharon, and he began to devote less and less time to the Guild. Eventually Zato-1 joined the Guild, and Slayer fully retired.  Due to the vacuum of power, the Guild devolved into a nothing but a gang of ruthless killers, its numbers growing by the day.  Thanks to the Forbidden Beast Eddie (implanted in him by the Post-War Administration Bureau), Zato's power greatly increased.  Within a short span of time, Zato became the new leader of the Guild.

In 2173, orphans Venom and Millia Rage were brought in. Venom was nearly killed by the Guild, as his natural aptitude for killing was hindered by his hatred of murder. However, Zato appeared and saved his life, and Venom has been devoted to Zato ever since. Though Venom was most likely a child when he was brought in and saved by Zato, it's unclear what age Millia was brought into the Guild. The Forbidden Spell Angra was cast upon her a soon after Zato received Eddie. Millia didn't want to be an assassin, but her relationship with Zato caused him to manipulate her to stay.

However, during a mission, Millia grew sick of the way Zato used her, and abandoned Zato while they were surrounded by enemies, though he managed to escape. Millia had then fled the Assassin's Guild, and, wishing to leave that part of her life behind, cooperated with the International Police Force to catch Zato, if in exchange Millia would be acquitted of all charges of assassination and removed from all formal and informal bounty lists if they could catch the ringleader of the Guild. Indeed, they did catch Zato and put him in the dimensional prison. Zato was imprisoned for quite some time, eventually causing him to obsessively curse Millia's name, while still harboring feelings for her as a woman.

Testament, who had ties with the PWAB, utilized their resources to free Zato-1 and have him enter the 2nd Sacred Order of Holy Knights tournament. The whole purpose for this was of course for him to shed as much blood as possible, being an assassin. Millia and Zato confronted each other at the tournament, though it is unclear what exactly happened between the two, but it can be assumed at this time, Zato had already went mad from the powers of the Forbidden Beast, and both failed to kill each other.

Some time later, back at The Guild, Millia would find herself working alongside Venom (begrudgingly, albeit Venom is treated like a junior to a senior by her) for the same purpose of tracking down what remained of Zato. At this point (Guilty Gear X), he was neither alive nor fully dead. His body would be completely dead by Guilty Gear XX however, as Eddie depleted Zato's life. At some point after Eddie's departure from the Guild, Slayer returned as he wanted to disband the Guild, since he believed its original purpose and has turned into something that not even he wanted.

Venom took over as the leader of the Guild in Zato's memory without going to Slayer first. Both eventually confronted each other, and Venom identifies himself as the leader of the Guild, prompting Slayer to say the Guild "no longer exists". Venom replied by saying that the Assassin's Guild is now a monument of Zato's power, and that he will kill Slayer if it means protecting it. Slayer says he is not weak enough to lose to a human, and the two fight. Afterwards, Slayer said that Venom's skills do back up his words, but he'll need more to defeat Slayer.  In one GGXX ending, Venom sealed Slayer in a chained coffin.

The other two endings have Venom never confronting Slayer. In ending 2, Venom found Eddie, killed him, and decided to take a rest, heavily implying that he died at Zato's side. In ending 3, Venom meets up with Millia and both fight, with Venom killing her. As GGXX was a type of side installment, none of these endings are considered canon.  In Accent Core Plus, Slayer is not sealed away, Eddie is still alive, and Millia is still alive as well. Because of this, it would seem that Millia's first ending in Guilty Gear XX is canonical with the Guild's future, with Millia attempting to confront Eddie, but with Slayer blocking her way. After a fight, Millia is not strong enough to get past Slayer, who revealed to her her hair's power is of the same origin of Eddie, though Millia "knew this better than anybody".

In Millia's AC+ story, one ending had her eventually confronting Eddie, killing him. Eddie asked if Millia will keep Zato alive in her memories, and faded out of existence. In Eddie's other ending, after a fight with Venom, just when Zato's body should have decayed to the point of no use left, Eddie doesn't die. Eddie then realizes his morality is different then a human being's, and strikes Venom down before leaving Zato's corpse to go live on as an independent creature. It's most likely Millia's first ending, in which she kills Eddie, is the canonical one. Venom's story in Guilty Gear XX Λ Core Plus​ reveals that shortly after bringing the Guild back from the brink of destruction Venom could find no joy in his work, and (in one his endings) disbanded the Guild himself and began traveling the world as a pool player.

In 2187, Venom was working on making the organization a more legitimate enterprise.  He received a mysterious contract from the Conclave, which has a very tempting reward: the revival of Zato-1.  Skeptical of the offer, he contactd Millia and has her investigate while he carried out their orders.  Along with Slayer, they discover that Zato-1 was indeed alive, and that his revival was a "test" in order for the Conclave to revive Justice.  Armed with this information, they intended to relay it to the High King, Ky Kiske.  However, their mission was derailed by Bedman, who easily defeated Millia, Venom, and Slayer.  They're dumped in Uighur, well off-course from their destination.  Zato eventually managed to find Ky Kiske and relay the information himself.

The Guild took yet another turn after the defeat, allowing Venom to reflect on what it meant to "protect the organization".  After fighting Millia and Slayer, they discover that he wanted to bring the Guild into the light, making all their work and hand in world affairs public.  Millia decided that she should become leader as well, and Zato made arrangements with the Third King in order to allow assassins to enlist as Illyrian soldiers.

During the Gear assault on the Illyrian capitol, the assassins battled with them and the Phalanx 9, showing that they could use their power to benefit society.  Venom sacrificed himself during his final battle with Bedman, leaving Millia and Zato to take over the new Guild.

How exactly the Guild works is largely unknown. It appears that members of the Guild have to wear some kind of black, hooded uniform that obscures much of the assassin's face.  In later installments, this changes to a black uniform with ties and white hoods similar to executioner hoods.  It's is unknown how exactly recruitment or teachings go in the Guild, it is known that the Assassin's Guild sponsors orphanages, and pick of the children with the most promise or fighting prowess. there is no mentioned age requirement to begin training within the Organization, though more often Children are selected due to the fact they can be trained early on. You technically don’t have to be an Orphan to join.

Alternatively, they also recruit powerful warriors, for example, Slayer attempted at one point to recruit Chipp and Baiken. If one displays no talent in the fields of assassination, they will indeed be killed, as seen by the Guild nearly killing Venom. This presumably goes for people of all ages. The only known rank within the Assassin's Guild is the leader.

The Guild also tends to handle desertion and betrayal with death.  In the cases of Tsuyoshi and Millia Rage, small armies of associates were deployed in order to eliminate them.  However both missions were unsuccessful (though they did catch up and kill Tsuyoshi). As seen by Volf, if a trained assassin fails missions too many times, they are executed.

Retrieved from "https://guilty-gear.fandom.com/wiki/Assassin%27s_Guild?oldid=26505"
Community content is available under CC-BY-SA unless otherwise noted.