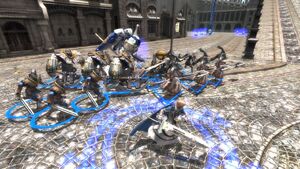 The Baptisma 13 incident is the official name of the invasion of United Kingdom of Illyria by the original Valentine and her Vizuel army in 2186 that takes place during Guilty Gear 2 -Overture-.

Valentine, and to an extent the Universal Will, desired to enter the Cube, a structure built by That Man located in the Backyard that is capable of manipulating information in the Backyard thus influencing the real world.

Unfortunately, they need a "key", the gear cells of Justice, to open it. Thus gears all over Illyria began to disappear and sublimate by Valentine and her army in an effort to find the key. Eventually, Dizzy Justice's daughter was targeted and was close to being sublimated; thankfully High King Ky Kiske managed to use the Thunderseal and froze time around her, saving her from a grim fate.

Unfortunately, with the location of the "key" revealed to them, the Vizuel army launched an all out attack against the capitol of Illyria in order to claim her.

Despite being armed with magic, they were ineffective against the Vizuel army and the city fell, with King Ky being trapped in a seal.

Sometime later, Sol Badguy, Sin Kiske and Izuna arrived and fought their way to the castle, clashing with Valentine in the process. The group managed to reach the throne room but were unable to free Ky from his seal. Sol and Izuna then traveled to Ganymede to get Dr. Paradigm to help while Sin was left behind to watch over Ky.

After passing Paradigm's test and repelling the Vizuel invasion of the archipelago; the doctor along with several of his Gear companions agreed to travel with the Sol back to Illyria. Paradigm was able to release Ky, but Sin was captured and brainwashed by Valentine, which meant she was able to obtain the "key" since Sin was Dizzy's son.