Colin Vernon is a supporting character in the Guilty Gear series. He is the 76th and current president of the United States of America, having taken over from Erica Bartholomew after she was rendered unable to fulfill her duties.

Vernon is bald besides a grey beard and eyebrows. He also wears a pair of black glasses. He wears a black suit with a white shirt and a red tie.

Normally cool, calm and collected, Vernon is the ideal leader model. He appreciates all the help Sol Badguy gives him while they combat and evade Happy Chaos' servants, and has deep respect for both Erica and Goldlewis. However, he cracks when it comes to speed and/or heights, as shown when Sol speeds on his bike up to a control tower, Vernon screams and panics.

Once the crisis was under control, Leo had a meeting with US President, Colin Vernon. The king's mostly checking in and making sure things have calmed down, but he expressed his concern about how no one seemed to understand the gravity of their current situation. Soon they shared information regarding Ramlethal's capture and whether or not the Cradle's appearance is connected to her. When Vernon inquired about Elphelt, Leo's unable to offer any information as she'll only talk to Ky. The president lamented over how Ky's actions were growing more unpredictable, and Leo told him that if he were to look up "problem child" in his dictionary, there would be a picture of Ky Kiske.

After being attacked by one of Happy Chaos' servants, it was revealed Vernon is a cyborg, having metal arms made with old-era technology that were able to block the servant's blow from its crossbow. He is also able to convert his right arm into a cannon. 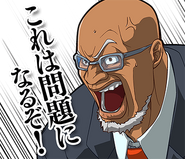 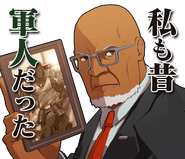