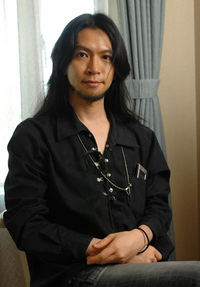 Daisuke Ishiwatari (石渡 太輔, Ishiwatari Daisuke?) is a South African-Japanese video game developer, illustrator, musician, composer and occasional voice actor. Best known for creating the Guilty Gear series, he is responsible for designing the characters and storyline, and composing most of its music.

Born in August 14, 1973, in Johannesburg, South Africa, Daisuke Ishiwatari conceived the original Guilty Gear before joining Arc System Works while he was in a vocational school.[1] After joining the company circa 1995, he revealed to the president he wanted to make a game in Street Fighter-likeness, which resulted in the first Guilty Gear[2] after a very long interval.[1]

Since then, he has become Chief Creative Officer for the company,[3] as well as a recurring composer. Ishiwatari is noted composing in the metal and rock genres, with his compositions featuring intricate guitar work and, as of late, vocals provided by Naoki Hashimoto from the band Outrage.

Retrieved from "https://guilty-gear.fandom.com/wiki/Daisuke_Ishiwatari?oldid=40441"
Community content is available under CC-BY-SA unless otherwise noted.