Daryl is a supporting character in the Guilty Gear series. He is the Third King of the United Kingdom of Illyria, after Ky Kiske and Leo Whitefang. Daryl governs the Eastern part of the massive Eurasian continent.

Daryl is a handsome man who has light orange hair with a long bang hanging to the right side of his face, light-blue eyes, and a mole in his left cheekbone area. He wears a dark blue shirt below white double-breasted waistcoat, as well as a white cravat and trousers.

At first glance, Daryl can be quite warm and welcoming, but he is a calculating man who values results above anything. He isn't afraid to make an objective analysis of any situation to gain the desired results, and surrounds himself with like-minded individuals. Although Daryl is at odds with his fellow kings Ky Kiske and Leo Whitefang, believing they cannot make objective decisions like he does, Daryl does respect their abilities. He is not too popular with Illyria's citizens, but few can deny his ability to govern.

Daryl is first introduced in talks with Zato-1. They discuss a potential alliance, and a possible absorption of the Assassin's Guild should they participate in the upcoming war. Daryl later speaks with Ky as he made the decision without the High King's consent. He explains that sometimes Ky and Leo aren't able to make objective decisions, and that they need all the help they can get, saying he is simply doing what Ky did by allying with Ramlethal Valentine.

Tied up in Internal Affairs, Daryl prepares the 13th Fleet for the assault on Justice, revealing to Leo that he plans on blowing her to pieces with the airships' cannons if the original plan goes downhill. Leo is opposed since Sol and Ky will be in the line of fire, but Daryl calmly told Leo that he'd try his best to spare them, but he couldn't guarantee it.

While Ariels is defeated, Jack-O' Valentine is initially unable to fuse with Justice and Daryl sees the mission as a failure. Daryl has his fleet start charging their cannons. Leo calls to remove Daryl from his position, and urges Ky to sign the documents. Ky declines, saying Daryl has a point regarding his decision. He asks Daryl to teleport Sin, Ramlethal, and Elphelt to safety but to leave him behind with Sol as he powers up a second Saint Oratorio for Jack-O'. Daryl obeys, but teleports Ky away as well, against his orders and gives the order to fire. In the end, Sol and Jack-O' survive due to Axl Low's intervention, and Daryl declares that he doesn't believe Sol is a hero but the God of War, and welcomes Sol.

In the aftermath, Daryl invites the Illyrian strategic operators and their heroes, Zappa and Randy, to celebrate. However, the first party was dashed by the loss of the main dessert, a massive pudding made by Alyssa. Days later, Daryl invites them all again. The easygoing night takes a turn for the serious as the group talks about how the pudding collapsed. Daryl accuses Randy of causing its destruction, but as more evidence is revealed, the blame shifts from person to person, eventually ending in Daryl being the accused.

Zappa starts piecing together the evidence, coming to the conclusion that Alyssa summoned a demon to make sure the pudding stayed intact but failed to extend the contract. As a result, anyone who tasted the pudding is being literally blasted into the sky as part of the demon's penalty. Due to tasting it, Daryl and everyone else—except Zappa—are blasted away. 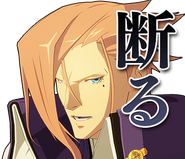