Guilty Gear Xtra
Dragon Install is one of Sol Badguy's Overdrive Attacks. It is a techinque in which an individual unleashes their powers as a Gear, and allows for a substantial boost in strength, speed, regeneration, and magic power.

Dragon Install is a technique in which Sol removes his Gear Cell Suppressor, unleashing his original power as a Gear. He gains massive power, but loses control of his emotions, so Sol dislikes reckless use of it.[1] Whenever he does so, his body flashes a silhouette, as if to contain an inner beast. In truth, this may be him holding back his transformation. In his Order days, the silhouette had wings and a long tail, which suggests that he learned to repress it almost entirely.

However, each time he uses it, the "seed"[1] of the Absolute World[2] inside of Sol accelerates in growth, causing notable changes to his appearance and abilities,[1] and acquiring the Backyard's abilities.[3] By 2186,[4] the Dragon Install started to "encroach",[3] making the transformation much more physical, with Sol's Gear form being dragon-like, with red and brown armored skin, wings and a tail, and being able to wrap his sword entirely in infernal flames. He uses the transformation against That Man, who observes that it has grown "this much"; although they engage in battle, Sol is unable to hurt That Man even then.[5]

Following the Baptisma 13 incident, Sol is once again covered in a dark aura, hinting at Sol modifying his limiter to suppress his powers, although not to the extent he was previously able to. In 2187, after the Cradle Incident, Sol foregoes using his Dragon Install entirely, as it would likely amplify the Information Flares, thus severely limiting his options in the fight against Ariels.[6] In the aftermath, Sol challenges Ky Kiske to a "real fight". Ky uses his war-time battlefield tactics, and Sol doesn't get the chance to transform, being defeated thoroughly.[7]

Three weeks later,[8] Sol loses the ability due to That Man returning him to humanity.[9] Meanwhile, Ky—previously limited to just manifesting a crimson eye[10][6]—develops the ability to do his own Dragon Install, and uses it against I-No.[9] Unlike Sol's, Ky's transformation is partial: the left half of his face turns black, his left eye changing colors (the iris becomes red and the sclera, jet black), and locks of hair turning neon-blue; a similarly-colored, scar-like mark travels down his left cheek. Ky's left arm turns dark blue entirely with his nails sharpening into claws, as well as a strange neon-blue marking akin to Justice's Gear emblem manifesting on the back of his hand; it constantly emits a dark aura, which during activation takes the shape of a wing.

In combat, Dragon Install is not often very practical, despite Sol's massive increase in movement and attack speed (allowing several of his normals to be linked into one another) and the extra properties on his moves, such as turning Gun Flame into a tall-diagonal burst of fire (slightly based on Gun Flame Charge Attack), turning the

version Volcanic Viper into a continuously rising attack leaving behind a huge vertical trail of fire (based on Volcanic Viper Charge Attack), and causing Bandit Revolver to have a flame trail along Sol's kick. Also, his standing

loses its jump cancel property for the duration. In Xrd, the effects of Dragon Install are more pronounced—accompanied by the song "Ride the Fire!"—, and lasts longer in Hellfire state. He can also access two exclusive moves: Slam in Λ Core Plus R and P.B.B in Xrd.

However, upon reaching his time limit, Sol enters a "pseudo-stunned" state (kneels on the ground clutching his head as he shakes it), leaving him vulnerable to attacks. Although Dragon Install possesses a great deal with start-up invincibility compared to most Overdrives, it is not recommended as a reversal, and the move is easily punishable in the open. The timings of his cancel and general combos are also vastly altered due to the increased speed, having less start-up time and ending lag, making control difficult. Ever since Slash, the mode instantly ends when Sol is knocked down, and Sol's stun resistance will drop as well. Before Xrd, Sol is also unable to use Bandit Bringer due to the upgrades to Bandit Revolver, as their inputs overlap.

Ky's version in Strive can only be activated when at 30% or lower HP, and is permanent for the rest of the round. During activation, it releases a shockwave with a hitbox that is short in horizontal range, but long vertically; if the opponent is in the corner, it will cause a Wall-Break. Similar to Sol's, it enhances Ky's special attacks and other Overdrives, but severely reduces his Tension gain, thus limiting his options for the rest of the round. Again, given its long startup and recovery, it is a generally unsafe move that either needs a combo or a hard knockdown prior to its activation.

His Dragon Install 2nd, only present in the Λ Core updates (although present as a hidden move in the first Λ Core), requires 100% tension. The power state will install even if hit, and is permanent for the rest of the round. The startup is signified by Sol being stuck in the starting frame of the animation as the screen rumbles for a while, before the startup flash finally occurs. However, this 2nd version comes with notable downsides: it possesses no startup invulnerability whatsoever; Sol's tension gain is put to 20% of its original value, and Sol's health steadily decreases until 1 HP is left. This overall makes this version of very little worthwhile use.

Order-Sol's Dragon Install is a brief stagger attack instead (the stagger is inescapable), with the startup aura itself having a hitbox (with his Gear form appearing in a brief flash). Once it connects, Sol runs towards his foe. With strict timing, the player inputs a series of commands—the Sakkai/Morbid World follow-up—to continue with a series of attacks ending with a Tyrant Rave finisher. If the foe is below a certain amount of health, Sol will instead enter his Gear form and finish with an Instant Kill. If the player fails at any point by missing the initial stagger or by doing an incorrect input, Sol will enter his pseudo-stunned state. Meanwhile, dropping the attack sequence deliberately at anytime with no input followup allows Order-Sol to recover normally. In Gold Mode, the combo proceeds without inputting commands.

It costs a Level 3 Charge Gauge and 100% Tension to perform, with the Tension cost reduced to 50% in Λ Core Plus R. Its activation command input was originally

in Slash, but it was shortened to

from Λ Core onwards. The longer version remained as EX Order-Sol's input, however. The Sakkai/Morbid World section is

. The original sequence from Slash had an initial

, the aforementioned gatling sequence, and then finished with

Sakkai's animations are in the following order:

The very final input afterwards with its own startup flash is Tyrant Rave ver. Ω's final upward recoil via the level 3 version (will launch instead of blowback if used to finish the opponent within the proper low HP threshold). When the low HP condition is properly triggered upon the recoil connecting, Sol will then enter his Gear form silhouette—with wings and a tail—while performing an altered Napalm Death, which is also more vertically angled and with the initial Overdrive flash freezing time before Sol leaps upward. When he lands, in the aftermath Order-Sol returns to normal and is in his stunned-state animation, only he has his headband discarded and his long hair undone.

Order-Sol, as an Arcade boss in Slash and Λ Core, has an alternate version known as Flame Distortion. It can also be used by Gold Order-Sol, with the command

. The visual cue is the screen blackening after the startup flash and Sol fading into the background just after an energy burst, then re-emerging with two flames crossing through his figure (from Level 3 Rock It).

Flame Distortion's benefits are twofold which last for around 10 seconds: on top of the speed boost, it continuously fills up Order-Sol's Tension and Charge Gauges, and regenerates his HP gauge on any difficulty settings higher than Beginner (unless he is getting hit, then the regeneration will halt for around a second when he recovers from hitstun). In most difficulties, his AI thus won't hesitate to abuse costly Tension-consuming moves in this state. Upon depletion, Order-Sol will lose all of his Tension and Charge Gauge (in Λ Core however, only the former is emptied) and will once again enter his pseudo-stunned state to be left open to attack. 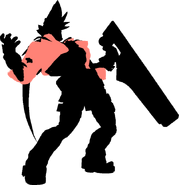 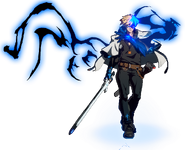