This article or section of an article is a stub. You can help Guilty Gear Wiki by expanding it. 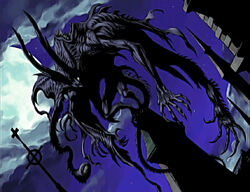 Forbidden Beasts are bio-weapons that house a human body, similiar to a parasite. During the Crusades, various organizations tried to create an Anti-Gear weapon derived from Gear technology. The end result was "The Six Forbidden Magics" otherwise known as the "Forbidden Beasts". The exact reason why they are "forbidden" is because utilizing the Magics resulted in extremely detrimental alterations of a subject, often making them no longer human.

The Post-War Administration Bureau realized that making Gears to combat more Gears was a mistake, so they switched to using the the Six Forbidden Magics (Forbidden Beasts) method. Once a Forbidden Beast is on the battlefield, Gears instinctively know they are a natural enemy; in fact that's related directly to a Gear's programming, strangely enough.

Forbidden Beasts can be housed in humans only after sacrificing something. In Zato-1's case, he sacrificed his eyesight to become a host to Eddie, a shadow Forbidden Beast. In Millia's case, she obtained Angra, the magical hair Forbidden Beast, when she was taken to the Assassin's Guild, though she was an unwilling participant. It is currently unknown what Millia had to sacrifice to have the beast on her hair. The third was an orphan from England, however, his body wasn't a suitable host for any of the Forbidden Magics/Beasts and therefore the subject, Venom, was rejected. Knowing all too well the aftereffects of the Forbidden Magics/Beasts, Slayer secretly chose Millia to be the one to ultimately kill Zato-1 should the power prove too unstable for him to control.

They are sometimes referred to as "parasites", as they have to live in a human body just to stay alive, and also secretly kill their host, even when they're not aware. An example of this was Eddie, who, slowly but surely was eating away at Zato's mind, until he lost control of his own body to the Forbidden Beast. This problem is present within all Forbidden Beasts/Magics, as Millia has worried she may one day lose control of herself to Angra, and even does in one (most likely non-canonical) ending in Guilty Gear XX Λ Core Plus, though is killed by her Admirer. However, in one of Eddie's ending in Guilty Gear XX Λ Core Plus, just when Zato's body decays to the point where Eddie can't use it anymore and believes he will die, he doesn't. He then realizes that a Forbidden Beast's morality isn't the same as a human beings, and leaves Zato's body, now living on as it's own independent being. It's unknown if Forbidden Beasts can indeed survive without hosts, or this is simply a non-canonical "what if" type of ending.

Retrieved from "https://guilty-gear.fandom.com/wiki/Forbidden_Beast?oldid=21514"
Community content is available under CC-BY-SA unless otherwise noted.