Guilty Gear X The Butterfly and Her Gale

Guilty Gear Xtra
Gabriel is a major supporting character and an important political figure in the Guilty Gear series. He is the current leader of the nation of Zepp, as well as the mentor of Potemkin.

In 2180, Gabriel led a successful revolution against the state of Zepp where he freed all the slaves. He rose in power as the new president, with a freed Potemkin in his service. This event has little impact on the international community however, since Zepp is politically autonomous and culturally isolated. His good leadership is evident in The Butterfly and Her Gale as Zepp remains uninfluenced by the Assassin's Syndicate. In Guilty Gear Xtra, Gabriel, Potemkin and Ky Kiske worked together to destroy a gear carrier ship falling from space. Though peace seems to have settled in Zepp, it is implied that it still has some political instability as Gabriel was nearly assassinated in one ending in Accent Core. Potemkin took the bullet and died protecting him.

Gabriel is almost never seen in battle but his strength exceeds that of his student Potemkin. He has also dispatched the likes of Chipp Zanuff in combat with ease in one-on-one combat and challenged Bedman to battle, the outcome of which almost causes the latter to wake up. Also, Gabriel is the only character that Slayer openly acknowledges as his rival and wanted to fight him one last time before leaving the world in Accent Core. This implies that Gabriel is one of the most formidable characters in the series.

Aside from Potemkin and Slayer, Gabriel has connections to the captain of the Jellyfish Pirates, Johnny, despite the fact that they stole the Mayship from the Zepp military. Gabriel is also partially involved with the cover-up of Dizzy's bounty, indirectly coordinating with Ky Kiske to protect her.

Throughout most of the series, Gabriel is praised by Slayer as a rival in battle. In Xrd, his prowess is shown for the first time in Story Mode, attending to the matter of capturing Bedman, who was rampaging around Zepp. While able to fight evenly against the likes of Sol Badguy and Slayer, Bedman stood no chance against Gabriel, who proceeded to overwhelm and  capture him.

Like his rival, Slayer, Gabriel forgoes any sort of weapon in battle, relying only on his fists. His abilities are of unknown origin, being unclear whether they are technological, magical, or just sheer brute force. His punches are capable of being ranged attacks and can create gigantic explosions on impact. Gabriel says his ultimate attack, Agni X, "will pulverize any living creature within eight meters no matter how fast they move or how well they guard themselves", a fact proven when Bedman is incapable of getting past it and suffers damage to his bed frame. Gabriel is also fast enough to catch Bedman when he attempts to flee, merely grabbing him and detaining him. He also punched a Gear the size of a building with enough force to send it soaring hundreds of feet above the ground. It is also revealed that Gabriel is the original creator of Potemkin's Buster technique. 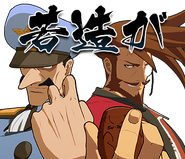 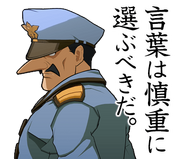