Initially released on the Xbox 360, unlike previous main Guilty Gear titles, Overture makes use of 3D graphics and is an action-based game, instead of a fighting game. On March 2016, it was released worldwide on Steam.

Although it retains special moves and animations from past entries, Overture is of an entirely different genre, described by Daisuke Ishiwatari as "Melee Action" (メーレーアクション, Mērē Akushon?).[source needed] It is action-based gameplay combined with real-time strategy and multiplayer online battle arena elements, and matches take place on a field map. Primarily designed around its multiplayer, it supports up to four players on Xbox Live or two players on the same console.

In a match, the players directly control any of the seven playable characters, who are called Masters. They can use their own special moves, Tension-consuming skills, and one Overdrive to attack. They can switch between two styles: "Free Mode" (normal mode where attacks can cover a wide-range and multiple targets) and "Lock-on Mode" (to focus on one foe). Master movements comprise dashes, jumps and Blast Drives. They can do Modern Cancels, Cyclone Blasts and Power Attacks. They also auto guard if not performing an action.

Masters utilize a troop management system. They summon their own souls in the form of an immobile Masterghost, which is their base of operations. If it is destroyed, the player loses the battle. It is protected by a barrier that, when up, makes attacks less effective. Only a Master can deal the final blow to a Masterghost. Players must bring up the Organ menu screen to do a variety of actions: summon Servant and Minion units and determine their path, conjure items and acquire skills, and convert Mana (their energy resource).

Each map has multiple bases that are called Ghosts; at the beginning of the round, they are neutral but can be clamed by repeatedly attacking them. They will rejuvenate neraby ally units, and will regularly generate mana. Masterghosts and Ghosts will automatically produce the easily-destroyed Capture units. They provide support by claiming other Ghosts, removing Masterghost barriers, or recover the health of nearby units.

There are three types of matches: Singles, Team, and Points Matches. Essentially, players win by destroying their opponent's Masterghost, but if the match isn't settled in five rounds—each lasting five minutes—, the winner is determined based on points. Conditions for victory are: Slash (destroy the enemy Masterghost), or Critical Down (a master is temporarily unable to fight when their life is reduced to 0; s/he respawns near the Masterghost, reducing its life bar, if it is still standing). True to previous entries, the game also features several modes: Campaign Mode (single-player story mode), Exhibition Mode (battle using one console), Training Mode, Free Mission (single-player mission challenges), Replay Viewer (to view recorded battles and organize files), Options, and Online (network battle mode).

The manual's prologue reiterates what was said in the original Guilty Gear manual: Humanity discovered the new alchemic theory of "magic", an unlimited resource that can reproduce the five elements without any costs. However, peace was broken by the Gear Project and its creation of the Gears, amongst whom Justice rebelled and declared war on humanity. The Crusades that brought humans to the brink of extinction ended with Justice's defeat, and Gears fell into a dormant state. Civilization entered a new era of peace, but they never knew what caused Justice to go berserk.

Overture takes place in 2185, five years after the original Guilty Gear. It opens with Sol Badguy travelling with his ward, Sin, both working as bounty hunters. Meanwhile, Ky Kiske, First King of Illyria, receives a report—the dormant Gears continue to vanish, and the capital is under attack by a mysterious force. As he prepares for battle, Ky puts a bounty on Sol's head. Days later, at the Village of Witches, Sol realizes that this is Ky's calling for help, and resolves to go to Illyria but he and Sin find themselves surrounded by the Vizuel.

The Vizuel have the upper hand until a voice introduces Sol to a new power, the Soul Sinker. The voice, Izuna, introduces himself and tells Sin and Sol that the Vizuel are seeking out and destroying Gears, and that their main area of interest is Illyria. Izuna, through a series of warp gates, takes the pair to the capital. There, they meet Valentine for the first time, who is looking for a "key"; Sol's head aches, and he is shocked by her resemblance to Aria Hale. After a fight, the group makes it to Illyria Castle, where they find Ky in a powerful binding spell. They briefly meet with Raven.

Izuna takes Sol, while Sin remains to guard Ky, to meet Dr. Paradigm, who can release Ky's spell. Sol is shocked to be brought to a colony of self-aware Gears. Despite his misgivings, Paradigm agrees to help the king. When he unseals Ky, Sol asks about the "Maiden of the Grove" but Ky doesn't know what to say. Angered, Sin storms out. Ky then shows that he used the Thunderseal to seal her so that she wouldn't vanish. Paradigm then realizes that the "key" is Justice's cells, which Sin (as Justice's grandson) also carries. Sol and Izuna leaves Ky and Paradigm to defend Dizzy while they chase after Sin

They are too late and Valentine kidnaps Sin. They track them to Bel Canto Valley where they fight a brainwashed Sin. After Sin comes to his senses, they follow Valentine but the Vizuel stood in their way. To their surprise, Ky, Paradigm, and the knights of Illyria arrived to take on the fight. Sol, Izuna and Paradigm go on ahead, leaving Sin and Ky to take on the Vizuel. Ky apologizes to Sin, and Sin says he will protect Ky because he is irreplaceable to his mom.

The three reach the gate to the Backyard, but it is already closed. Immediately, the gate opens and That Man comes out. Sol unleashes his evolved Dragon Install and fights him, but he is only testing Sol. The battle ends with Sol unable to damage That Man. That Man gives the group a blessing that will enable them to survive the Backyard's immense pressure and leaves.

The group enters the Backyard and catches up to Valentine. The key is already in motion and the Cube is starting to open. Valentine so transforms into a monster and battles the late-arriving Sin, Izuna and Paradigm. Meanwhile, Sol stops the Cube from opening. He succeeds, and Valentine fakes that she'll give up fighting and will self-destruct. Sol, Sin and Izuna escape the Backyard, but Sol remains behind to fight yet another form of Valentine. In the fight, Sol battles both her immense body and her soul, and hears a rush of her emotions and memories. Once he lays the final blow, the last thing she says is his true name, "Frederick". After the fight, Sol finds himself in a white space, unable to return.

That Man appears before him yet again. He reveals that Valentine is involved with "a merciless apocalypse", an event that Sol is to take part in. Sol asks if Valentine was Aria, but That Man says they already killed her. Weakened, Sol vows to kill That Man, who will wait for him. Thanks to his help, Sol is able to return to the real world and reunite with the others.

Initially inspired to create the original Guilty Gear as a fighting game due to Daisuke Ishiwatari's own love for them,[1] the team was directly involved with the series up through Guilty Gear XX ♯Reload, and felt that they did what that had set out to, and wondered where to take the series next.[2] Ishiwatari attributed the genre change in Overture to the idea of exploring other venues for making competitive games[2] found in European and American games, while retaining the ins and outs of fighting game mechanics.[1] As a "battle tool" intended for multi-player battles, the Xbox 360 was chosen due to being easier for a small-and-mid-sized developer like them.[1]

Ishiwatari also intended Overture to officially continue the story of the original Guilty Gear.[1] However, they were unable to directly use characters introduced in Guilty Gear X and XX, such as Dizzy and Faust, due to Sega owning their rights[2] after its merger with Sammy Studios. Arc System Works wouldn't completely own the rights to Guilty Gear until 2011.[3]

A playable demo featuring three modes of gameplay was released in Japan via Xbox Live on 30 October 2007,[4] and fully released in November 2007. The North American version was released in October of the following year, and had slight modifications that Japan did not get. Such tweaks are the inclusion of Training Mode, Point Matches, Replay Viewer, as well as more items to choose from and the ability to be able to move while selecting servants, items, etc., during single-player.[1] 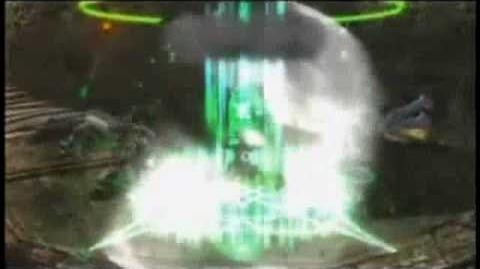