Guilty Gear Xrd -REVELATOR- is the sixth main installment, and the overall twenty-second entry, in the Guilty Gear series. The direct sequel to Guilty Gear Xrd -SIGN-, together they are the third chapter in the main storyline.

The game has received an update, Guilty Gear Xrd REV 2, which introduces two additional playable characters (Baiken and Answer) and which was released in March 2017 for both arcade and consoles, and in June 2017 for Steam.

In terms of controls, movement, and attacks, the game remains virtually unchanged from Xrd -SIGN-. It reintroduces Throw Breaks from Guilty Gear XX Λ Core, which occur when two players attempt to normal throw each other at the same time.

Another new addition is Stylish Type: It introduces an extra button (Special, SP) for performing specials and Overdrives. Connecting normal attacks in sequence results in situational auto-combos and blockstrings, and in neutral may block mid and high attacks automatically; however, stylish characters take 20% extra damage from attacks.

Burst Overdrives are also introduced. The character's cinematic Overdrive can be used as an augmented Overdrive that costs both 50% Tension and the entire Burst Gauge, and is performed by doing the Overdrive's command +

. They have fully invulnerable start-up and deal 25% more damage than their regular counterparts. Successfully landing one restores a third of the Burst Gauge.

after a successful Dust Attack) now forces the opponent into a tumble with the character pursuing them, normal attacks re-tumble for a while, then cause the opponent to plummet; if the opponent reaches the wall, they still stick to it. As with Homing Jump, normal attacks can be cancelled into other normals freely for a short period of time. Blitz Shields were also altered: a successful rejection now slightly refills the Burst Gauge, and a crouching shield can now be done with

+ any attack button except

, but it no longer rejects mid attacks. Similar to Dead Angle Attacks, Blitz Shield on the ground can be followed up with a Blitz Attack by holding

; by holding it longer, the attack is charged even as it continues to reject attacks and cannot be rejected by a Blitz Reversal at max charge.

The game's modes also remain mostly unchanged, except that Library Mode is now called GG World Mode. The Tutorial now features mini-games and strategies against characters' specific playstyles, while Online Mode's lobby system allows the player to pilot an in-game avatar around virtual arcades looking for matches, or go fishing to collect upgrades and add-ons. There also badges and a new set of trophies that can be earned by the player. The Ver.1.03 patch, besides balancing existing moves, added new songs and Elphelt's -SIGN- outfit as purchasable in Gallery Mode. Ver.1.04 added the Digital Figure mode, through which players can create their own digital dioramas using in-game assets.

A week since Ramlethal Valentine declared war on all of humanity, Sol Badguy and his crew begin an investigation in order to track down Elphelt Valentine, who has been abducted by her "Mother".

Notes: Characters in italics are console-exclusive.
(*) Unlocked by paying an amount of World Dollars(W$) in-game or via purchase from the PlayStation Store or Steam.

Developed by the same team that worked on -SIGN-,[1] -REVELATOR- was first announced for the third quarter of 2015 release on arcades, starting from a location test in June.[2] There is no English dub present, largely due to a lack of time to add one, as the time between releases was short[3] with the North American release coinciding with the Japanese release in the second quarter of 2016.[4] 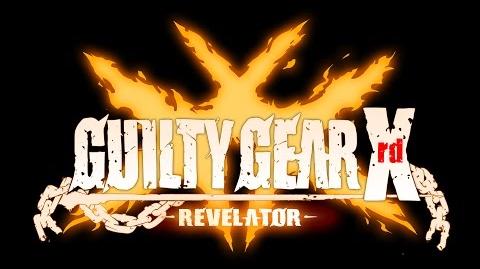