Guilty Gear Isuka
Leopaldon is a mysterious character that has only appeared in Guilty Gear Isuka as the boss of Arcade Mode, a collective composed by a dog fused with an ancient Gear and controlled by a sorcerer. It is unclear whom the name belongs to, but it most likely refers to the dog and/or Gear.

All that is known about Leopaldon is that he is a good man always trying to do the right thing.

There is very little information on Leopaldon. Originally a huge white Gear, it is now in a semi-fused state with a brown dog. It should be incapacitated, but it is piloted by a mysterious man, simply called a "sorcerer" (ソーサラー, Sōsarā?), who has the ability to steer Gears. The sorcerer himself is not malicious and seems to be using the Gear's abilities to aid people living in the polar regions.

The game's tagline is presented thusly: A new Gear arises, its name Leopaldon. As they threaten to lay waste to the world, everyone prepares to mount their offense. The confrontation takes place in Antarctica, as it is Leopaldon's stage, and he is presumably defeated for good.

Leopaldon is extremely resilient, as the Gear's belly is impervious to all attacks; the game reads all attacks directed there as a Guard. To defeat him, one must attack the man and his dog, who are stationed in the Gear's open mouth, and thus can only be defeated by aerial attacks. He can also be hurt by hitting his back by using a teleportation attack. His main technique are claw swipes, as well as forming walls of ice or fire stones via magic spells.

The giant Gear is thought to be a Megadeath-class Gear, due to its large size and attacks, many of which being extremely powerful and destructive—such as Perfect Rainbow, a laser that is belched from Leopaldon's mouth. 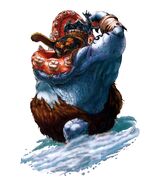 Idle stance.
Add a photo to this gallery