They are powerful attacks that require Tension to be employed, and are comparable to the Super Combos present in the Street Fighter series, essentially being called Super Moves.

Overdrives first appeared in Guilty Gear, although they were originally localized as "Chaos Moves". In this entry, they are attacks that take a completely full Chaos Gauge to use, having more elaborate inputs compared to Special Attacks. Some specific Overdrives can be performed when below 50% health, signaled by the life gauge turning yellow, and the character is surrounded by a red aura, having entered Chaos Mode.

The Overdrive system was revamped in Guilty Gear X, receiving their current name and reducing the cost of usage to only 50% Tension, but there are a few exceptions that use up the whole bar. As for their uses, some Overdrives are useful as reversals, while others power up the character. On start-up, Overdrives freeze the game temporarily to show the character doing a pose or an animated cut-in before attacking. As they usually have start-up before and after this "superflash", they allow the defender to react. They cannot be repelled with Psych Bursts when the start-up flash occurs or on hit, neither they can halt the animation of an activated Burst on the same frame alone.

In Guilty Gear and X, all characters have at least one Overdrive, but since then everyone has been assigned a minimum of two per game. In Λ Core, the start-up flash of the Overdrive along with its sound has been replaced with entirely new effects. Meanwhile, the old Overdrive start-up flash sound from X is reused for the new Force Break mechanic. In Overture, Overdrives appear as each Master's most powerful move, executed by pressing (X) + (A) at maximum Tension.

Upon the introduction of damage proration ratings applied to independent moves in a combo, Overdrives since then also have a unique scaling where they will always deal a certain percent of minimum damage if used in a long combo, which can still make them viable finishers if enough Tension is left over to spend.

In the Xrd games, they reduce the opponent's HP bar by at least 20%, Blitz Shields have no effect, and they do 20% more damage during Hellfire. Overdrives that power up the character, like Sol's Dragon Install, do not get the benefits listed, but they last longer in Hellfire state. In -Revelator-, certain Overdrives can be powered up as Burst Overdrives (バースト覚醒必殺技, Bāsuto Kakusei Hissatsu Waza?), which cost both 50% Tension and the entire Burst Gauge. All characters can power up their one cinematic Overdrive by doing the motion input and pressing

. They have fully invulnerable start-up and deal 25% more damage than their regular counterparts—their minimum damage increased to 50%. Successfully landing a Burst Overdrive restores a third of the Burst Gauge. 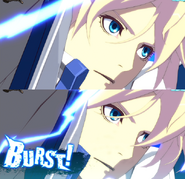