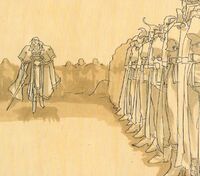 The Sacred Order of Holy Knights (聖騎士団 Seikishidan; known also as the Holy Knights or the Holy Order) is an international military force formed to battle Gears.

At 2074, a major country (speculated to be United States, latter known as A Country) attempted to use Gears to dominate other nations. However, Justice, a Gear with a free will who was the sole Command Type, controlled other Gears and gave them a human extermination program. Her first target was the nation of Japan, and because of the overwhelming power of Justice and the Gears, it was destroyed. As a response to this tragedy and as a defense against the threat of extinction, the international community (United Nations) formed the Sacred Order of Holy Knights, and the war known as the Crusades began.

The Crusades remain as a mysterious section in the Guilty Gear history. It is known that the war lasted for a hundred years, but other details are very minimal. The few known facts include Kliff Undersn becoming the knights' commander for decades and its greatest warrior, and that he lost his son, Testament, decades before the events of the first game. Ky Kiske and Sol Badguy entered the Order a few years before the Crusades ended.

Sometime after 2173, Ky Kiske becomes the last commander of the Order and successfully led mankind to victory against the Gears. The war ended at 2175 at Justice’s sealing, and the Order was disbanded.

In 2180, the fear of a revival of Justice led to a Sacred Order recruitment tournament, the main story of Guilty Gear. The former members Sol Badguy, Kliff Undersn and Ky Kiske participated in said event, which is actually perpetrated by Testament.

With the war over, the knights return to the civil society. However, it is most likely that some of them continue to follow Ky Kiske into the police force all the way to his kingship in Illyria. In Overture, the knights seal dormant Gears and guard them for information and research. The Illyrian army, Ky's Servants, and the few royal guards who protects his lover, Maiden of the Grove (Dizzy), the primary force that battled with Valentine's Vizuel army, are also shown to be knights.

During the Crusades, the Order acts mostly on defense in response to the Gear’s relentless attacks. It is not known if Gears had a systematic invasion system, but their numbers were far superior, regenerating and reproducing in a faster rate. In the Drama CD, the Gears at just one Gear plant are three times the number of the Order’s largest fleet. Because of this, the knights' activities are limited, involving small-scale typical military operations such as evacuation of civilians, responding to distress calls, and guarding shelters.

Transportation is mainly through magic-powered airships, and radio is still used for communication. Combat is mostly melee, either through magic or physical attacks. Swords and staffs are seen as the staple weapons. Firepower such as guns and cannons are not used, since they are considered Black Tech, but homing devices from airships can target enemies and attack them with amplified magic. The Order greatly values nature, and preserving the environment is one of their top priorities. However, out of necessity, they may resort to harmful weapons, such as the satellite blast that was used in Operation “Last Resort” to finally kill the town-sized Megadeath-class Gear Hydra.

The Order also has medieval-styled fortresses and bases, one of them is a playable stage in Overture. It is also hinted that Paris is the main headquarters of the Order since it is Ky Kiske and Sol Badguy's stage in many games.

The Order is heavily similar to the middle age crusaders. It is implied that the Order is under the control of the Catholic Church, as their values reflect traditional Christian chivalry. Some members of the Order display forms of charity and dedication to public service, like taking in orphans and protecting civilians.

In Guilty Gear X, Testament, who swore himself as Dizzy’s knight, recited a Holy Knight oath, "In front of the populace, I shall be a shield from the storm and a rock of support".

Only the strongest fighters are allowed to join the Order, and its way to select the best is through a recruitment tournament. So far, only two tournaments have been known in the history of the Order: one was held at some point before the main story, while the other happened at 2180. The exception is Sol Badguy, who was recruited personally by Commander Kliff Undersn and joined the Order as a special member.

There are no known restrictions in participating in the recruitment procedure. Women are allowed to join, and they are seen to be fighting in the frontlines in the manga. The basic requirement is the ability to wield a weapon, and young teens are allowed as long as they can fight. However, it is most likely that they become apprentices first. Ky was no older than 14 in the Battle of Rome, and May battled in the second recruitment.

The Order functions like a usual military unit with a strict hierarchy. The only ranks known so far are commander and captain. Most likely, a captain commands a fleet of airship and lower ranks come directly under. However, despite having no specific rank, Sol is a dignitary, implying that he holds a special status. The Order also has specialized units for physical attack, magic and healing. Airships also require engineers and technicians, and scientific research that does not belong to the Black Technology is in the workings of the organization.

The Post-War Administration Bureau also worked with the Order by restoring or mitigating the damage to society and nature by the war.

The standard Holy Knight uniform comprises of a short cape, white pants, golden buttons and a belt, though this is customized by members according to their liking. One of the most memorable aspects of the Holy Knight uniform is the belt’s plate where members carve their favorite word. This tradition was inadvertently inspired by Sol and Ky. Ky’s word is “Hope”, Sol’s is “Free,” Leo's belt buckle bore the word "Pride" while Melbeth carved "Sacrifice" on his belt. There are no other known belts beside Robo-Ky’s “Ennui” which means “boredom”.

The uniforms are also color-coded. Young recruits have their uniforms outlined with turquiose, and Ky Kiske is shown to wear such in an illustration. Sol Badguy wears red, as he is a fire magic user, and Kliff Undersn wore brown for earth magic. Likewise, Ky’s lightning magic may be directly responsible for the blue color of his uniform.

In the manga, the knights are seen to wear different types of outfit according to their style of combat, aside from the standard uniform.

A few important characters are former members of the Order.

Two priests are revealed to be former members of the Order. In the novel 'Lightning the Argent, one, named Melbeth, adopted Marina after seeing her as an infant left at the church’s doorsteps. The priest in the Drama CD stays in the church where Kliff's grave is located, and has had conversations with Testament. When he saw Dizzy’s Gear nature, he called her a demon and ordered the villagers to kill her.

Retrieved from "https://guilty-gear.fandom.com/wiki/Sacred_Order_of_Holy_Knights?oldid=23708"
Community content is available under CC-BY-SA unless otherwise noted.